USA Made Promotional Products: 3 Cheers for the Red, White and Blue 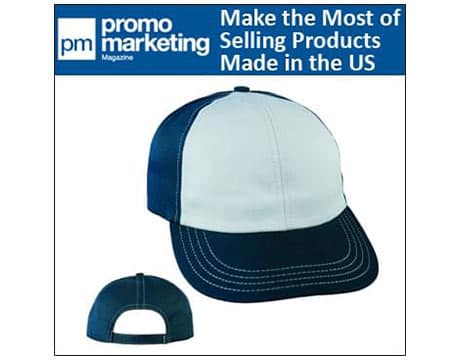 How to make the most of selling products made in the U.S.

There are plenty of products that were made in America that we should all be proud of—Bruce Springsteen, baseball, movies where Nicolas Cage navigates an elaborate scavenger hunt made up of national monuments to find a historic treasure. The list goes on, but what stands out the most are the many promotional products manufactured in the U.S., and the business opportunities they present. By providing products made domestically, distributors can create business with new clients. Here’s how.

Aside from providing jobs in the U.S., domestically-made products can give distributors the chance to work with clients that otherwise may not have been available. David Bronson, national accounts manager for Unionwear, Newark, N.J., said that many companies only will purchase products that are made in the U.S. He named nonprofit, government and military organizations as potential clients that [usually] purchase domestically. “More and more, large domestic manufacturers, food processors, tech companies, and other corporations that promote themselves as ‘Made in USA’ are requiring their logo gear to also be consistent with their domestic mission,” he advised. “Unions and political campaigns generally have domestic sourcing requirements, which will boom in the upcoming presidential primaries and general elections.”

Bronson, who has been a distributor for a decade, added that using items made in the U.S. makes sense from an economic standpoint. “Domestic manufacturing is beginning to make sense economically in a number of areas,” he noted. “In particular, small-batch customization allows buyers to save on overhead, such as sampling, tech packs, sourcing, prepayments and lead times, that can dwarf the unit costs of importing fewer than a thousand units.”

Tim Boyle, president of JournalBooks/Timeplanner Calendars, Charlotte, N.C., explained that buying domestic ensures the protection of U.S. labor and manufacturing laws. “The U.S. has much stricter laws and regulations regarding safety and compliance,” he said. “When distributors sell U.S.-made products, they do not have to worry as much about factories using child labor or unsafe materials.” He added that distributors should still evaluate a company’s code of conduct and compliance safety standards. “Compliance and safety are top concerns for end-users,” he said. “Although the standards for compliance are improving globally, it becomes much trickier for distributors once they go offshore.”

Some distributors may be hesitant to choose domestic products over imports, as they say they can often get products from overseas at a cheaper price point. However, importing products can come with a high price tag that some distributors might not take into account. Factors such as duties, fees, shipping and port delays can throw a monkey wrench into the process and end up costing more than it than saves.

Bronson also explained that some clients would even be willing to pay more for domestic products. “Even when import pricing can still result in significant savings, there are many end-users who will still pay a premium to co-brand with the most powerful brand in the world—Made in USA,” he said.

Boyle he believes the global competition is a good thing for U.S. companies. “It’s hard to compete with importers on price, but not impossible,” he said. “We are constantly exploring new ways to increase manufacturing efficiency and decrease material costs, and we can often be competitive with import items, especially custom projects. Price is only one aspect of the equation.”

The best way to compete is to produce a better product. Bronson said that many imported items are made with cheaper materials and unnecessary labor, which creates an inferior product. “A common example is tote bags coming out of China that have a seam along the bottom,” he detailed. “This adds labor cost to the bag and also weakens the bag at its biggest stress point.” He explained that the sum is there because cutting large panels into smaller pieces provides a greater yield for the manufacturer.

“If a bag has $40 in materials in either China or the U.S., but it costs $4 to sew it in China vs. $8 in the U.S., the end difference will be $44 versus $48,” he continued. “And that $4 difference will be more than eaten up by shipping, fees and duties.” Bronson added that the gap between the price of imports and domestic products has decreased every year for the last six years, and he believes the trend will continue.

GIVE THEM WHAT THEY WANT

According to Consumer Reports, when given a choice between a U.S.-made product and an identical item sourced overseas, 78 percent of Americans prefer the American product. Boyle and Bronson are optimistic about the demand for domestic products.
Boyle said that he sees the demand for U.S.-made items himself. “My opinion is that the demand for U.S.-made products has never been stronger,” he said. JournalBooks, which has manufactured in Charlotte, N.C. since 1971, has taken steps to keep up with the increased demand. “We do whatever it takes to keep up with demand, whether it is adding the necessary equipment or adding members to our team. JournalBooks has a modern, 90,000-square-foot facility with plenty of extra capacity for additional growth.”
In Newark, N.J., Unionwear is having its best year to date. “The demand is higher than ever,” Bronson said. “It has been a challenge to continually increase capacity.”

He attributed much of the success to Unionwear’s ability to offer detailed customization. “Small batch customization is one area where improvements in order processing and set up times can have big payoffs,” he expressed. “We can make any of our bags in any color combination customers want at low quantities. This is what China does not offer the industry.”

Three Cheers for the Red, White and Blue