Unionwear is the merchandise provider of choice for Trump, Biden and others 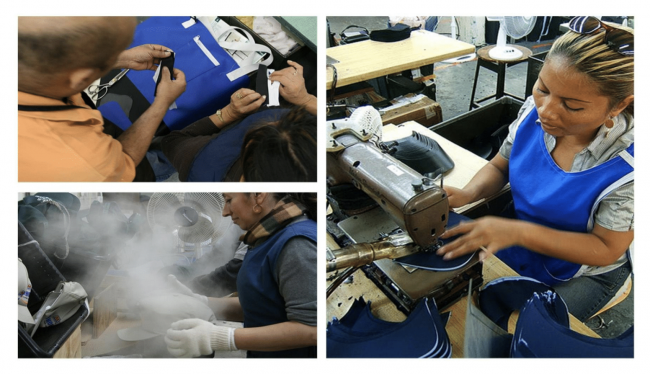 Unionwear in Newark, NJ made hats for the Warren, Bloomberg and Trump campaigns. Mitch Cahn, CEO of Unionwear, has been overflowing with orders of merch. Before the Coronavirus pandemic, the factory had been making election swag for both parties since 1992.

Before the Coronavirus hit, Unionwear was making between 2000-3000 hats in a single day. The factory orders usually come from agencies working with campaigns or candidate-supporting groups. That’s because political campaigns often want to hire US-based businesses for their merch.

The 2016 election was also a busy season.

Cahn continues: “The one time we saw a very surprising spike was with the original ‘Make America Great Again’ hat. The demand overwhelmed the supply. There are only a handful of factories [that could produce these] in the United States working on that hat for Trump.”

This sort of swag often doubles as campaign contributions, and it adds up. The Trump campaign sold more than $20m worth of merchandise between 2016 and 2018.

But not all campaigns make money on merch. Mike Bloomberg did not make money on his hats. He funded his run out of his own pocket.

Political swag is as old as the Presidency itself. Buttons bearing George Washington’s initials were sold at his first inauguration in 1789. But the business really took off in the mid-90s, when Mitch was just getting started.

“When the Internet came around and e-commerce became more viable, we got into the political market in a big way,” Cahn commented. But it wasn’t always easy. “All of our clients had moved overseas. And then we were left with a baseball hat factory and a lot of employees, and not a lot of places to get business from.”

Mitch had to transform the company, but he didn’t have to look far. He began selling to unions, who were looking to buy from Unionized businesses like his. He also began selling to military agencies, some of which are required to buy US-made goods.

Then came the political campaigns.

“The first order we got was a small order for the Bill Clinton campaign and was maybe 150 hats. Our first big break was with the Al Gore campaign [in 2000.] We sold probably more hats than we ever sold for any one particular client before. It was probably 200,000 hats overall.”

But having lots of swag may not translate into lots of votes, especially in 2020.

“The candidate that ordered the largest amount dropped out of the race early, Andrew Yang. That was definitely the most hats we’ve sold in this election cycle.”

Yang’s campaign sold more than 30,000 “Make Americans Think Harder” hats, which made up about $1.2 million of campaign revenue and are still for sale on his website.

And, what does Unionwear do with its merchandise once a candidate drops out?

“We have this down to a science. We are producing in small batches. Someone would have to drop out unexpectedly for us to get stuck with anything.”