Candidates who want Made in USA call Unionwear 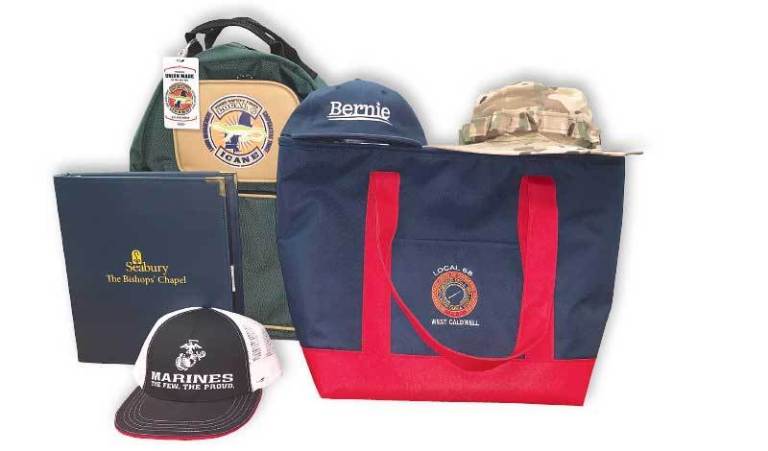 No matter whose team you’re on, there’s money to be made in presidential campaign-branded baseball caps — epitomized by those red “Make America Great Again” hats.

Promotional products made by Unionwear include hats, backbacks and tote bags.

And Unionwear is one of the few companies in the running for that profit.

Mitch Cahn, president of the 180-person manufacturing team in Newark, says there are not a lot of textile products such as hats being made in the United States in general today — most of the work has gone to China or other emerging economies.

But, certain customers need to send the right message by choosing U.S. manufacturers for merchandise. That includes any would-be commander-in-chief.

Promotional items with the coveted “Made in USA” label tend to get a boost from the presidential race, but with the popularity of President Donald Trump’s iconic headwear from the last election cycle, Cahn said baseball caps are especially relevant now.

“That hat really drew attention to hats as a campaign accessory,” he said. “That helped our business out immensely. We actually did some of those hats at the beginning of the Trump campaign before he settled on another manufacturer. At the same time, we did hats for the Democratic candidates and, ultimately, Hillary Clinton.”

When it came time for the presidential campaign season to get underway once more, Cahn said his business was busier earlier in the election cycle than it has ever experienced.

Right now, the business is busily manufacturing large quantities of hats for several of the Democratic candidates. Cahn didn’t name the clients, but he did add that three of the four candidates using Unionwear were at the top of polls.

Unionwear also makes accessories such as laptop bags for other clients, including the military and labor unions. It boasts that it compensates its Newark garment workers with union wages and benefits. And that’s a selling point around campaign season.

“Because someone who wants a union-made baseball hat really just has one choice — so that’s going to come up during presidential elections,” Cahn said. “A lot of candidates want to appeal to unions however they can.”

But, when the showdown for the country’s top job ends, local manufacturers are left with the competitive pressures of keeping products American-made.

And that goes double for keeping them New Jersey-made, given the higher costs of real estate and the minimum wage set to rise to $15 by 2024, Cahn said.

“Most of our competition is in the Southeast, where a lot of the country’s garment industry is,” he said. “There, the minimum wage is still at the federal minimum of $7.25. So, unless that goes up, by 2024, it’ll cost us twice as much to pay an entry-level employee here as it would in Georgia.”

That’s why the manufacturer is expecting to do some reinvestment in the automation necessary to sew and produce garments, even if the orders are coming in left and right for hats with campaign logos and slogans.

Cahn said he has no intention of replacing his workforce, but instead wants to give each person the potential to do more tasks.

One of the only reasons it hasn’t happened already is that the development of automation tools has been slower in the textile sector compared with other manufacturers.

“Most automation works well with hard goods, because they’re easy to grab and have finite measurements,” he said. “Things that are soft, you run into issues of robots being unable to grab fabrics and feel wrinkles in the fabrics.”
But, even with more options available now for the hat-maker, it’s safe to say there’s going to be more robotics on the manufacturing line come next campaign cycle.

“Several years ago, it wasn’t something we’d even consider, because the labor was a lot less expensive and the automation was a lot more expensive,” Cahn said. “The price of automation has come down tremendously and the price of labor keeps going up. So, now, it just makes sense.”